There is a line in a hymn used in the Divine Office, for example Tuesday of the 2nd week of Ordinary Time, for the Office of Readings, which has been a refrain in my heart for some time as a source of meditation.


Daily I choose a different part of the neighbourhood or local cemetery, if walking, or a different part of the city if on public transit, or in this northern city with its anywhere from seven months or more of winter, with the icy sidewalks, bus it to a mall for a walk – the point is those are special times each day to pray for the people, especially to pray they will know Jesus, to pray for their burdens, their needs.

I remember, since the anniversary is upon us, with so much swirling around it this year, being in New York shortly after 9/11 at the invitation of a New York Fire Fighter who wanted me to come down, spend a week in prayer for the city, walk the sacred ground with him to help him grieve, seeing innumerable faces of New Yorkers masked with fear.

It is a mask after-all, not the gifted face from the Holy Trinity to a human being born in the image and likeness of God.

Perhaps at some point in the midst of some trauma or abuse or disappointment the mask was noticed, being pro-offered by the hand of pain, or flight or some other dark emotion which had crafted it – or maybe it was after some sin inflicted upon self, or committed against another, or being violated by someone or caught in war or struggling down from the towers or watching them come down upon your brother Firefighters, the mask was offered by another, a creature more twisted and hideous even than the mask of fear itself.

There is the heart-wrenching yet tender moment in Genesis when, after their chosen act of sin Adam and Eve have gone into hiding – which itself points to their inner turmoil since who can hide from God? – when Love Himself comes looking for them.

How is it God could not see them? Simply He chose not to “see” them in then sense of “God saw-and it was good” of the creation moment.

Certainly He looked for them and upon them and towards them and spoke with them seeking answer for their hiding and Adam says: “I was afraid…..”

The first human being created in the image and likeness of God had accepted to put on the mask of fear, a mask formed by and offered to Adam by the very father of lies who had induced Adam to open the door of dark-fear into creation, into human life.

Across the millennia since then fear is a harsh component of human life.

Thus the line from the hymn mentioned above: WE ALL HAVE SECRET FEARS TO FACE….

Some of the fears appear not so secret and common to the larger world, the extended community, such as fear of extremists and terrorists, of a collapsing economy, or if you live in certain parts of the world fear of another earthquake, flood, drought, famine, civil war, suicide bomber, or if you are a woman or child in Darfur or the Congo or places hidden from scrutiny you live in constant fear of rape and abuse.

WE ALL HAVE SECRET FEARS TO FACE…..

Perhaps you are elderly and alone and walking on crowded streets mugging is feared or just tripping and breaking a hip or you fear the day when family comes and packs you off to a nursing home among strangers – or – perhaps you are a wife and mother, or a child, living in a situation where you await in fear for the next onslaught of physical, emotional or sexual abuse, too terrified, indeed paralyzed by the fear to the point where you tell no one your secret.

WE ALL HAVE SECRET FEARS TO FACE…….

In the Church of today priests carry a deep secret fear – for in the current climate where it certainly appears from their actions that bishops accept at face value any accusation about virtually anything from the most evil crime of abuse to financial mismanagement and move against priests in such a way as the priest is totally done for, without due process – the deep and secret fear is of being accused.

In all the examples sighted, of perhaps obvious secret fears that we may believe are secret within ourselves but are so widespread the stress in the wording of the prayer-hymn is, rightly, on the word WE – for this is a human affliction which cries out to heaven for relief – modern media does much harm by fanning those fears by constantly harping on the negative we all know, but rarely, if ever, proclaiming good news about how the causes of our fears are being overcome.

The common denominator and foundational root of all fear is a type of inner conviction, aided and promoted by the evil conveyor of fear: satan.

The secret fears we have to face are also exacerbated by our own analysis of the situation – hence even though he was ardently and lovingly sought by the Infinite of Infinite, Tender of Love Himself, Adam was afraid because he knew himself to be totally powerless before One greater, more powerful than himself.

When our secret fears have us in bondage, if we examine them/it objectively, we will discover an inner conviction that the threat/person triggers within us a profound awareness of being vulnerable, powerless and a deep sense there is no one, perhaps not even God, more powerful than what we fear. 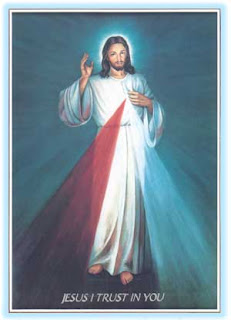 Here He is, our fearlessness and our peace!

Pope John Paul, who endured many public fears in his life, such as what he and his nation endured under the Nazis in WWII, may well have had secret fears as well – certainly after he was shot he would have lived with the reality of being vulnerable to assassination and yet here we have the Great Pope who wrote an entire encyclical on Divine Mercy and urged, through the private revelations to St. Faustina, devotion to, that is absolute trust in, Divine Mercy.


Mercy, that is the lavishness of love and peace we so need in these anxious days of human history and in our own deep selves where secret fears dwell, is the core of the person and message of Jesus – the key, of course, is to choose to take OFF the mask of fear, even better to refuse it when offered in the first place; the key is, even if my emotions are spastic with deep terror, to choose with my will not only to say but to live: JESUS I TRUST IN YOU!

Towards the end of the hymn about secret fears we pray the truth that: The Gospel speaks…Your love…O help us live what we believe.
Posted by Arthur Joseph at 1:51 pm

Father, a great post indeed. You have some great insights into fear, and, you know, no matter what, if we're living in this world it's hard to keep fear at bay. The worries themselves in this world can be overwhelming if we think about them enough. But we are called to be witnesses, not on just the sunny days but in the darkest of dark, not necessarily to be happy but to shine the Light of Jesus into those dark corners and valleys of the world. See, you got me thinking, Father. Great post. k