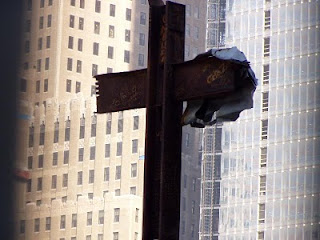 Praying this morning not only for those murdered nine years ago on this day, but also for an end to hatred and violence throughout the world, I was remembering something seared in my heart when, sometime after that horrific day, I was at ground zero with a New York Firefighter friend.


My friend, who of course had been there like hundreds of other first-responders on that almost incomprehensible day of devastation, had asked me to come to New York to return to Ground Zero with him so he could grieve.

The above image of molten steel hardened on the beams in the shape of a cross, seared itself in my heart as a reminder of how Jesus not only embraced and then defeated all forms of hatred and death in His own Self and Self-Gift but in His Glorious Resurrection is our Way, Truth, Life.

Early this morning the above appeared in the blog http://whispersintheloggia.blogspot.com/

Having been in New York before the towers were built and after, it took some time, standing at the edge of the massive gaping wound in the earth, the city, the nation, the world, to comprehend and remember not merely the buildings but that human beings, our brothers and sisters in their thousands, had been there – one moment beginning an ordinary day, the next engulfed in unimaginable horror, which for so many was their last moment on earth.

We know the enormous courage and self-gift of the hundreds of Firefighters, Police and others, including a Catholic Priest, who rushed into the towers, laying down their lives for others.

It remains within me that awareness of immense self-sacrifice as the strongest memory of 9/11.

Nine years on the perpetrators of hatred remain violently active and fear of another attack sustains the memory of 9/11 as a gaping wound.

Our Lady’s Saturday as the Liturgical Calendar notes.

My prayer, through the intercession of Our Lady of La Salette on this day is very simple: that we honour truly the memory of all the victims of 9/11 by truly loving one another.

Only love is stronger than hatred and death.
Posted by Arthur Joseph at 8:34 am