Why the silent scream? 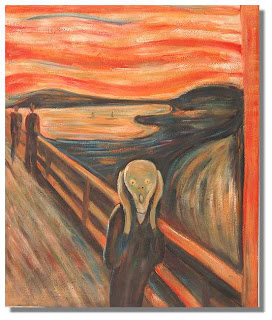 Before dawn this morning I was checking the latest emails, of which two informed me of brother priests: one died peacefully in his 83rd year, after 55 years of priesthood and the other died by his own hand.
Out of respect for the priest who committed suicide I include here no other details suffice to say his is the second suicide of a brother priest reported to me this week.
I knew the first priest personally, though we had not seen each other in more than 20 years as the country in which he was born, lived, served is far away and his health prevented travel and my own circumstances likewise.
Heart to heart, geography is irrelevant since at the altar, in prayer, we were/are always together in the Holy Hearts of Jesus and Mary.
The second priest, until today, was unknown to me by name, but every priest shares in unity at the altar and in the Holy Hearts.
Normally my reaction when I hear of a priest taking his own life is one of intense pain, and prayer for mercy to be lavished upon him – yet this morning I was suddenly gripped with utter fury and found myself asking God where all the real bishops are? Where have they gone? Why do the bishops we have seem lacking compassion, courage, enough manly fatherhood to hear the silent scream of their despairing priest sons?
It is now mid-afternoon and the fury has abated, mostly, and I have prayed with affection for our bishops but cannot shake this sense something has gone terribly wrong that bishops in particular, but frankly all priests and yes anyone who knows a despairing priest, well somehow we are missing the clues, or don’t love enough or………..
There was a time when, it is said of St. John Chrysostom, that alone of all the bishops he refused to kowtow to the Emperor and spoke rather bluntly to the imperial personage who apparently told the saintly bishop: “No bishop has ever spoken like this to me!”
To which St. John replied: “Then clearly you have never met a real bishop!”
Courage!
The bishop who ordained me saw himself as father-servant of his priests.
For example when we would be on retreat the bishop insisted on being sacristan, laying out vestments, preparing the altar. As well in the evening he would walk around praying his rosary and, stopping by each priests’ room, gently asking about how we were – not how our parish was but how we personally were.
One final example: even though he had to act as required when I was falsely accused he stanchly defended my innocence and when I was convicted of something I did not do paid for an appeal and once I was acquitted restored me to active ministry.
He has since died but I sense always his fatherly presence.
Compassion!
Eventually I settled down even more before I began to write this and was praying for all despairing priests when suddenly I remembered the first time I saw a copy of “The Scream” and how transfixed I was and yet how it seemed incomprehensible to me any human being could be in such apparent despair.
Each time a priest commits suicide I admit I tremble while praying for his immortal soul, always with intimate confidence in Divine Mercy, yet aware every one of us might also fall into despair.
I am blessed to have a loving and supportive family, loving and supportive confreres, each of whom keeps a close eye and checks, especially when I am stressed, offering all needed support – and – they never believe me if I claim to be okay when I am not.
To quote from the diary of Edvard Munch who painted “The Scream”: “I was walking along a path with two friends – the sun was setting – suddenly the sky turned blood red – I paused, feeling exhausted, and leaned on the fence – there was blood and tongues of fire above the blue-black fjord and the city – my friends walked on, and I stood there trembling with anxiety – and I sensed an infinite scream passing through nature. “
All of us: bishops, priests, laity need urgently to beg Christ to have His heart with which to see, His ears with which to hear the silent scream of despairing priests.
Indeed we should be trembling, not so much with anxiety but with the intensity of our courageous, compassionate, active attentiveness and concern.
We need hearts and smarts, that is the wisdom to gently, yet if needed also firmly, to check that our priests are taking proper physical, emotional, spiritual care of themselves and if not then we need to intervene, to help them – for the silence around priestly suicide is itself the cry of our Mother the Church for her children who are no more.
Posted by Arthur Joseph at 7:14 pm No comments: