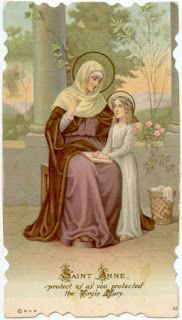 OLD WOMAN AND CHILD
There is something so tender, peaceful, loving in the image of St. Anne and her daughter Mary.
Mother of Mary, the Mother of God, St. Anne is also the Grandmother of Jesus!
Grandmothers are supposed to be persons, indeed a place, of tenderness and peace.
In their old age, cared for and given the particular freedom of the elderly to simply be and love.
It is a reality throughout the world where children in their thousands are orphaned by AIDS, war, terrorism, oppression or the demands of survival which take both parents from home to field or factory, office or increasingly in this dangerous world into the military, more and more Grandmothers are in loco parentis.
Presidents and Prime Ministers, pundits and professional theorists of matters economic and social, wax on and on whenever oil spikes or gas prices force people to make choices, when unemployment increases, when food becomes expensive, invariably those with power and those who comment speak in dispassionate tones meant to convey sincere panic laced with hopeful clucks about how things will turn around.
Rarely do they speak in the voice or with the voice of, nor even for, the Grandmothers of the earth.
When John and Lucille Everett’s [ see: http://blog.catholiclove.com/ ] daughter was three she began a game where either she would go grocery shopping and any adult present would be the storekeeper or she’d reverse roles.
Either way the game was always announced as: “Let’s go shopping.”
In a home full of love and food, of course, money to the child was no big deal and in her imagination, housed in a little being well cared for, for whom hunger and cold were/are unknown, you could always ‘buy’ all the food you wanted.
So hearing through the open window a child’s voice saying: “I like shopping.” is normal enough.
Looking out the window and seeing a little girl in red bunny pj’s carrying a little blue shopping bag, holding the hand of an elderly woman, her Grandmother, seeing the child filled with joy as she and Grandma stopped at each of the dumpsters in the alley, and when there were no bottles or milk jugs to be had say plaintively to her Grandmother: “Well, no shopping here!”, is to observe not a child at play but the face of Jesus in the Old Woman and Child, Jesus hungry, Jesus worn out and tired yet loving and serving, Jesus in red pj’s.
That the wise Grandmother has made dumpster diving into a shopping spree shows the wisdom of love.
That in our overfed nation, spending billions on ways to get rid of our bloated tonnage, rather than being a game of pretend in the heart of a warm, safe from hunger home, a child should have to go shopping with Grandma by dumpster diving……………….
Posted by Arthur Joseph at 4:19 pm