HE DOES NOT CEASE! 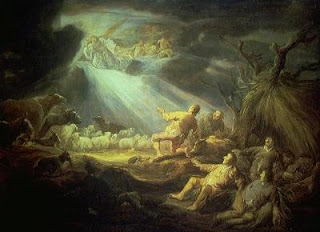 CHRIST IS BORN! GLORIFY HIM!


Thanks to the internet each year nowadays we can participate in the Holy Father’s Midnight Mass streamed live from Rome, listen to the powerful words of his homily, words which flow from a true shepherd’s and childlike heart.

In the days leading up to Christmas this year as I prayed for the whole human family, the Church, the suffering Priesthood, especially for those who in so many countries suffer from violence, for those Christians who are persecuted for their faith, I was drawn not to contemplate the various scenes, such as above, of the great event of Jesus’ birth but rather this one: 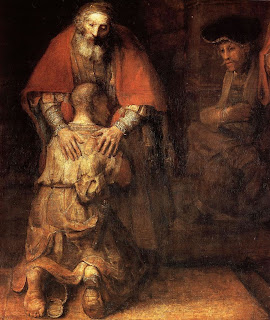 In his book “The Return of The Prodigal Son”, Fr. Henri Nouwen uses this famous painting as template for his reflections, stressing the homecoming aspect of the encounter between father and son.


In the Prologue he notes that it is ultimately a “…walking step by step toward the One who awaits me with open arms and wants to hold me in an eternal embrace.”

It is Jesus Holy Child who reveals to us that God indeed is Abba, THE Father and how our very existence from the moment of our creation, even if for whatever reason we are not always conscious of it, is this step by step walking towards His eternal embrace.

Yet the very movement of the father in the Gospel standing at the edge of the road scanning the horizon to await first glimpse of his returning son, tells us that Our Father steps more quickly towards us, and I would say more consistently, than we toward Him.

Thus these powerful words from Pope Benedict’s Homily during Midnight Mass: “God has anticipated us with the gift of His Son. God anticipates us again and again in unexpected ways. He does not cease to search for us, to raise us up as often as we might need. He does not abandon the lost sheep in the wilderness to which it has strayed. God does not allow Himself to be confounded by our sin. Again and again He begins afresh with us. But He is still waiting for us to join Him in love. He loves us, so that we too may become people who love, so that there may be peace on earth.”
Posted by Arthur Joseph at 12:56 pm

...step by step walking towards His eternal embrace." I like the imagery in that, and that is exactly what we are doing, or should be doing. And to think He's waiting for us, no matter what we've done. More mysteries...