ONE OLD PRIEST AND A HIPPIE 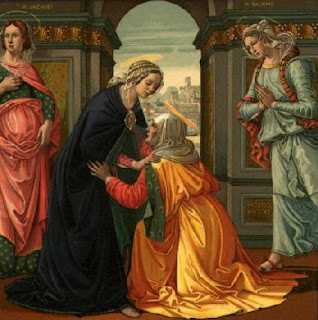 It is the Feast of the Visitation, the 25th anniversary of my Ordination and immensity of grace to be thankful for.


During Holy Mass in the hermitage this evening one priest in particular was on my heart.

I met him one cold and wet November night, around two in the morning.

It was towards the end of the hippie era and I was hitchhiking to a commune, but the days of many young people wandering the country, the globe really, on foot or in beat-up vans or old Volkswagens, were dwindling.

The non-violent approach to civil rights, after the deaths of both Kennedys, Martin Luther King, the seemingly never ending bloodbath in Viet-Nam, - well the expectancy of the ‘6o’s was giving way to the nihilism of the 70’s, background music no longer “We shall overcome” and other protest songs, but increasingly the numbing thump of disco.

Perhaps there is an important symbol in the fact this encounter with the old priest occurred in the dark of night, when the November sleet had me soaked to the bone, in the tiny town with no all-night gas station or coffee shop, with nary a car nor person about, no warm light coming from any building or house, my aching body starved for food after being on the road with no money, nothing to eat – well in desperation, even though I hated the Catholic Church and did not believe in God, when I saw the small brick church and the rectory – I just went and banged on the door!

Eventually an upstairs light came on, then one behind the glass of the front door and the human shadow, once the door opened, was revealed as an elderly priest, dressed in full cassock and collar.

There was something luminous and gentle about his face and I had barely begun to describe my plight when he ushered me into the warm hallway.

“You’re soaked. This will not do. Wait here.”, and with that he went upstairs, coming down some minutes later and telling me to go up myself, the light would be on in the bathroom.

“Have a nice hot shower. Put on the dry clothes – leave your things in the hall and then come down to the kitchen.”

I was so tried and grimy and hungry!

Upstairs I went and there in the bathroom were fresh towels, clean clothes – so I took off my wet stuff, piled them outside the bathroom door and had a lingering hot shower.

When I eventually came down to the kitchen the old priest had made a meal of hot coffee, thick slices of bread, butter, roast beef.

While I ate, he gently asked where I was going.

No pressure, no invasive questions, just a gentle and paternal expression of what amazed me as genuine concern.

When I was well and truly stuffed he told me where the guest room was and suggested I get some sleep.

Typical and suspicious me I lay there in the bed trying to figure out what his angle was, but being exhausted fell into a deep sleep without having figured out his angle.

Next morning when I opened the guest room door, there on a chair were my own clothes, washed and ironed.

When I walked into the kitchen a huge breakfast awaited me, but the old priest was not there.

It was only when I had finished eating that he came in [ I was too dumb to have figured out at the time he had been in the church celebrating the morning Mass!] and asked if there was anything more he could do before I headed off on the road again.

I assured him not and thanked him and headed to the front door.

As I stepped outside he said: “You know I believe Our Blessed Mother wants you to be a priest. Here, for your journey.”

He handed me a book of the Lives of the Saints and a rather large amount of tens and twenties.

I was so shocked by his words and the book and the money I barely mumbled a thank-you and typical me, in those days, when confronted with pure kindness, fled!

I brought him Holy Viaticum, anointed him, stayed with him until he had breathed his last.

Yes, it was the same priest from that November night.

The name of the parish where he had shown me such kindness: Our Lady of Mercy.
Posted by Arthur Joseph at 9:33 pm

A great, great story. As soon as you put yourself in God's hands (walking up to the rectory) He took over, and it sounds like your life was never the same. Thanks for sharing that beautiful memory. Peace. k

Your readers might be interested in the more recent issue of CHRISTVS REGNAT the journal of St. Conleth's Catholic Heritage Association in Ireland.

We'd be very grateful if you would post about our journal and link to and blogroll our blog.