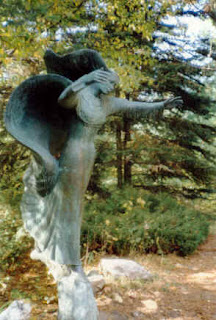 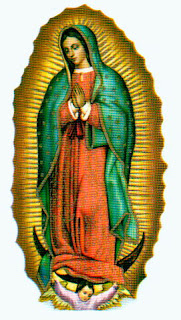 Normally at this time of day, mid-afternoon, when not serving in the soup kitchen but rather in poustinia [hermitage], I would go for my prayer walk, each day a different section of the neighbourhood, praying for the people here and throughout the city.
However after a two day blizzard the extreme arctic cold has arrived and it is dangerous to be out for very long – do pray for the homeless that they find shelter.
The blessing of extra time to read and write is welcome as my heart has been moved by two people who commented on this morning’s post, one who shared their re-consecration to Mary will take place this Saturday, feast of Our Lady of Guadalupe, Mother of the Americas, and another who will make her first consecration, the Montfort Total Consecration, likewise on this coming feast day.
Both remind me of how much I owe Our Lady of Guadalupe, she who is so persistent in seeking out all the lost and leading us back to Jesus!
First then, thank-you both and everyone who loves and prays for we priests, especially this Year of the Priest, when I pray in particular ALL priests will consecrate themselves to Jesus through Mary, Mother of Priests.
Second, then, in anticipation of Our Lady of Guadalupe’s feast day, an example of how Our Lady is always a true mother, teacher, guide.
Almost forty years ago, through a series of unexpected events, being at the time a Marxist-atheist-hedonist, I found myself in Mexico and eventually, on Christmas Day actually, in Mexico City and, frankly rather angry about it, in the plaza in front of the ‘old’ shrine as opposed to the ‘new’ one of present day, which at the time was not yet constructed, of Our Lady of Guadalupe.
The immense crowds were pushing up the great staircase into the basilica and a friend who was with me insisted on going to Mass, which I thought was an idiotic idea and refused to go along, but oddly agreed to go as far as the top of the stairs and to wait there or back down in the plaza until ‘it’ was over!
Suddenly there I was standing before the open doors, and just as suddenly no more people were shoving past to get in.
Given the extreme bright noonday sunlight I should not have been able to see inside the great building, nor from that distance to see clearly, as if right before it, the tilma, upon which is the holy image of Our Blessed Mother.
Yet so it was, so it is within my heart this very moment.
I wanted to flee but was frozen to the spot until, wrenched from the core of my being, gazing upon her beautiful and maternal face, a cry leapt from my being: “Bring me back to your Son!”
So shocked was I, and suddenly able to move, by this experience, I turned and fled down the stairs.
Halfway down an elderly Mexican woman, ascending the stairs on her knees praying the Rosary, grabbed my wrist with rather a solid grip and told me in Spanish not be afraid, Our Mother “has heard you.”
As quickly as she had grabbed me, she released me, and I continued my flight!
The journey of conversion [still ongoing to be sure] was rather long but some years later, thanks to a good priest, filled with compassion, who in his university days had become Catholic thanks to Our Lady, I returned to the sacraments.
Three years later, on the feast of the Assumption, Father urged me to enter the seminary, which I did a year later on the feast of the Nativity of Our Blessed Mother, eventually being ordained on the feast of the Visitation – the same day 22 years before when my Spiritual Father was ordained.
I especially love Our Lady as Our Lady of Combermere, who is imaged coming towards us, indeed rushing towards us, just after the Annunciation, arms wide open, mantle flowing to envelop us and hold us close to her heart and womb, she now the living Tabernacle of the Incarnate One.
Yes, intimately close to her Son Jesus!
Teaching today in Rome, Pope Benedict reminds us that: “....Mary constitutes a sweet and reassuring presence....She tells people of our time: Do not be afraid, Jesus defeated evil, uprooted it, freeing us....”
Then, towards the end in remarkable words the Holy Father reminds me of that Elderly Woman who grabbed my wrist, of homeless people I know who, in all their pain pray constantly for everyone, of so many “...who in silence, in deeds not words, strive to practice the Evangelical law of love...men and women of all ages, who realise that it is not worth condemning, complaining or recriminating, that it is better to respond to evil doing good.....”
As Pope Benedict urges so I pray that we will all: “...listen to Mary’s voice. Let us hear her silent but pressing appeal. She tells each one of us that wherever sin increases, may grace overflow all the more, first in our hearts, and then in our lives!”
Posted by Arthur Joseph at 3:07 pm

I remember my first visit to the shrine, knowing it was a holy place, entranced by the image on the tilma. I've never been able to adequately explain it, but from the moment I walked into the shrine, well, She knew I was there. And her presence was with me throughout my stay there, and often ever since.

Even when I've tried to run away, she has followed after me, much like a mother chasing after a toddler! (Something I witnessed and was a part of this very night after Mass! lol)

Also...in a discussion with a friend, he made me realize that I HAVE done the preparation for the Total Consecration, just perhaps not in a conventional way, but one designed by Our Mother herself.

I fully believe that I am came back to the Church through her intercession, starting with a few feeble prayers I offered in the Basilica...for her intercession. I think it was something as simple as, "Help me, Mother."

OK, dang it, now I'm getting all teary!

I'm looking through my course notes for the exact words she said to Juan Diego, and to all of us:

"Hear and let it penetrate into your heart, my youngest son, that there is nothing for you to fear, nothing to afflict you. Let neither your face nor your heart be worried. Do not fear this nor any other illness, nor anything pounding nor afflicting. Am I not here, I who am your mother? Are you not in my shadow, under my protection? Am I not your fountain of life? Are you not in the fold of my mantle, in my crossed arms? Is there anything else you need? Don't let anything afflict you, perturb you...."

Father, I've never been to the Shrine, never even seen a picture of it, but through your post I could imagine seeing the tilma...thank you for sharing that glorious memory, that part of your life story with us. If the past is any indication tomorrow's re-consecration will rush upon me, and again Her Mantle will cover me as before, the closeness of Her then is the only time I have really felt Her touch. But that's alright. It is all enough.